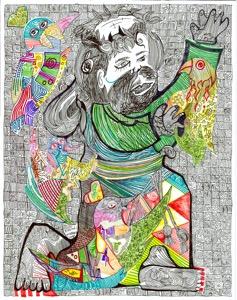 I am an artist, writer and composer from Fridley, Minnesota.

​My bipolar condition is often prone to set me with procrastination and incomplete studies. In my art, I leave white space to create an illustration of my ability to end a visual piece abruptly. I write and draw every day to support my mental health. I am particularly drawn to sacred subjects, but I also draw for fun. For example, I have drawn caricatures of people as their favorite vegetable.