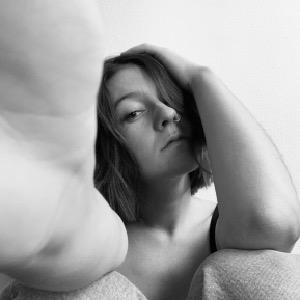 constance klippen is a creative artist from minnesota. with a natural inclination toward visual art since childhood, she has expanded upon her unique style of expression into adulthood.

as a child, she was able to easily visualize ideas for blank space, and as she grew older began to value originality over all else in her work. originality still remains the foundation of her creative ideas and completed work.

constance primarily paints on large scale canvas with a combination of acrylic paint, latex paint, and oil pastels. art courses in high school and higher education expanded her technical abilities and their influence can be found in her work today. she remains consistent in drawing inspiration from the images her mind visualizes on blank space, and has deepened intent and complexity throughout the years of her practice.

her new body of work is heavily influenced by her time on the road from late 2019 to 2021. the work tells the story of the teachings, the belief in the attainability of our dreams, the loss and betrayal, and the enlightenment that carried out along the way. these works will be displayed at the hallberg center for the arts in wyoming, minnesota this fall, from october 20th to november 12th, 2022.